Tis the season to ‘get into the beat’

If you visit Belize in November and December, you had better be ready to pick up the beat, as in drum beat. And, get ready to witness some flamboyant dancing, specifically the dance called “dugu” by its Garifuna originators. More importantly, be ready to take in the story of a transnational ethnic group that has evolved into what is commonly called by its members, “The Garifuna Nation.”

Comprising a major portion of Belize’s population, the Garinagu (Garinagu is formally the term for the people and Garifuna the moniker for their culture) settled in Belize after 200 years of on-and-off turmoil on the Caribbean islands, a destination resulting primarily from two Spanish slave-trading ships that wrecked near St. Vincent Island with West African slaves aboard. 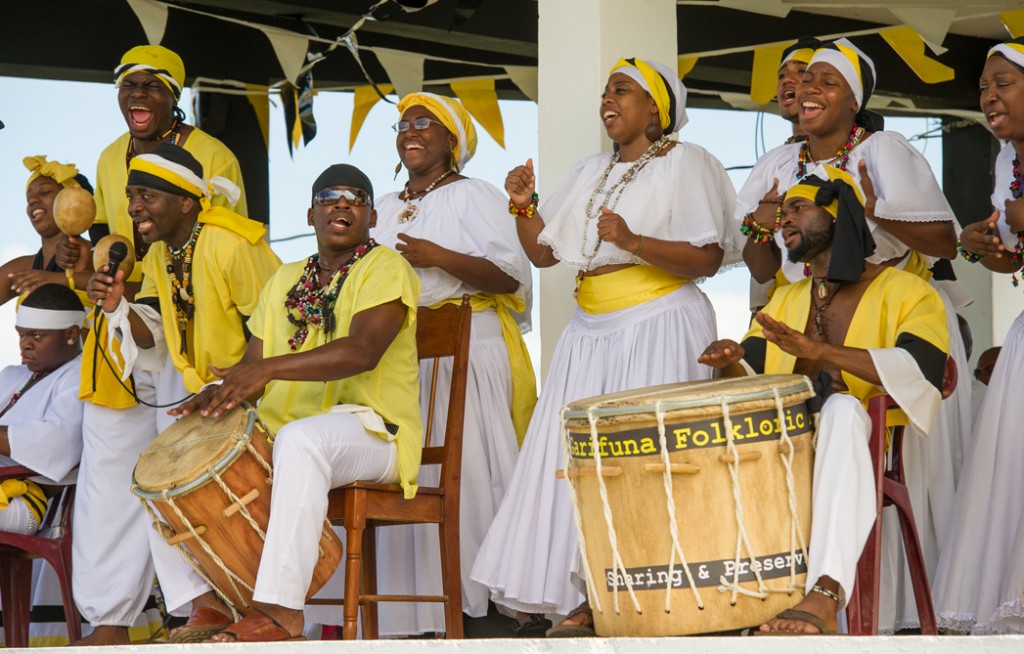 Actually, up and down the coasts of both Belize and Honduras, from where this unique ethnicity of African, Arawak and other Caribbean island Indian descent first came ashore to the Central American mainland, the drumming is ubiquitous up to and even after Garifuna Settlement Day, celebrated November 19.

Ensembles of drummers in all of the Garifuna villages—especially those on the coast—gather spontaneously alongside the road, at school celebrations, in parades and in central hubs of their villages. Many of these drummers are more than willing to teach the rudiments of the Garifuna beat to the curious bystander who wishes to put a drum between their legs.

Further signifying the importance of the drum in Garifuna culture, an annual Battle of the Drums event is held on the Saturday preceding Garifuna Settlement Day in one of the most notable Garifuna hubs, Punta Gorda in southern Belize. This year, 2015, marks the 10th anniversary of the drum competition, which draws contestants from throughout Belize, whether from large communities or small villages.

Music and dance are integral portals to Garifuna heritage, telling stories of the culture’s birth, its tribulations, triumphs and overall history. A visitor can learn a lot from simply standing outside the circle of a dugu dance. Elders sing and chant lyrics that portray the lives of their ancestors while the deft of foot take turns stealing the dance floor in costumes mimicking European colonists who once ruled over them before they landed on the mainland. Most any Garinagu bystander at the dance is more than willing to share what they know about the culture’s history.

Many world-renowned Garifuna musicians, such as the late Andy Palacio and the Garifuna Women’s Project (aka Umalali), have taken their people’s story to concert halls in North America, among other continents of the world.

The drumming reaches its fortè during the re-enactments of the first landing onto what was then British Honduras. Dories (dugout canoes) carry villagers, festooned by native flora and dressed in traditional Garifuna attire, to the shore where teams of Garinagu drummers and revellers await their mooring. This ritual, called “Yuremei” by the Garifuna, usually begins shortly after sunrise. The remainder of the day is full of drumming, dancing, merrymaking and storytelling. 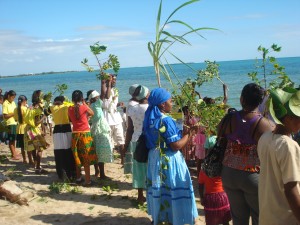 Literally, Yuremei is derived from the word, “Yurumein,” the Garifuna name for their first home, St. Vincent Island and the Grenadines. It means “the beauty of the rainbows in the valleys.” In the Garifuna heart and mind, the term is a euphoric reference to homeland, the font of Garifuna spirit and ancestry.

Yurumein (or Yuremei) is often merged with the term, “sairi,” the utopian afterworld extolled by the original Garinagu people. Sairi lies at the heart of the dugu dance ritual in the form of the “feast for the dead,” where food from the sea is brought by dories to a temple (dabuyaba), which always faces eastward and toward St. Vincent, as gifts to the ancestors and spirits of the Garinagu.

As Christmas approaches, the streets begin to come alive with dugus and other traditional Garifuna performances. If one is living or staying in a Garifuna village at this time of year, they had better wear their earplugs if they want to find sleep at night. The drumming and dancing know no clock, nor does the spirit and resilience inherited from those shipwrecked slaves who swam to the shores of St. Vincent so many centuries ago to ultimately weather the storms of slavery, war, persecution and exile.

The Garifuna is a culture that now stands strongly and proudly beside its Belizean brethren, the indigenous Maya Indians, the Creoles and the Mestizos. November and December is its time to let everyone “get into the beat.”