The great allure of the Great Blue Hole

It dominates postcard stands in Belize. It is arguably the most talked about natural feature of the Caribbean in travel guides and exploration shows on TV. It is a destination that the easy-to-spot outdoor zealot wearing shorts, Tevas or Keens around your office in the dead of winter has invariably mentioned at least once.

It is notably circular, 400 feet deep and, if hues were measured in feet, its shade of blue would extend much greater than 400 feet. It is called, appropriately, the Great Blue Hole.

It is the aftermath of a large sinkhole along the Lighthouse Reef section of the Mesoamerican Reef, which is only second to the Great Barrier Reef in size. It is a benchmark destination for divers more for its geological significance than the fish or coral formations inhabiting its cavity, though myriad marine life can be viewed when diving in the Blue Hole. 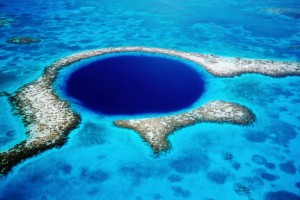 The Great Blue Hole owes its appeal and fame to one of two possibilities for its formation. It either developed as a sinkhole on dry land, indeed its own continent, to later be flooded at the end of the ice age, roughly 10,000 years ago, or it developed while under the risen sea, but much the same way as a sinkhole on land would develop. Cenotes, the terra firma version of a sinkhole, develop when former underground water channels or caves are formed relatively close to the earth’s surface. Where there is abundance of such shallow caves, the surface of the earth becomes weakened and then finally collapses.

The venerable and late Jacques Coustou made the Blue Hole and its atoll a household word with his exploration of it decades ago. Its geological allure stems from the pressure created by water during and after the ice age that carved an hourglass figure beneath its surface. A diver vertically views sea walls that slope slightly inward for the first 100 or so feet of submersion. Then stalactites start to appear, some as long as a whale shark, the biggest fish (not a whale) in the ocean and a popular visitor to Belizean waters itself.

These stalactites eventually give way to sea walls that begin to slope outward closer to the bottom of the Great Blue, essentially lifeless at that depth because of microorganisms that consumed organic sediment as it drifted down thousands of years ago. Indeed, divers will find brownish water at nearly the 300 foot mark. This is where the emission of the decompositions, in effect hydrogen sulphide, from the hungry microorganisms occurred. The voracious microbes essentially starved the Blue Hole’s deepest parts of the organic sediment or dissolved oxygen needed to sustain life near its floor.

In fact, the deepest parts of the Blue Hole are extremely acidic as a result of the dearth of oxygen. This acidity is believed to be the cause for the blue beauty’s hourglass figure.

Here are some other tidbits about the geology of what is commonly listed among the top 40 natural wonders of the world:

–The sediment at the Blue Hole’s bottom has been kept so intact and undisturbed by water currents that scientists are learning how to draw clues from the sediment about the history of global climate change.

–The Blue Hole is not unique. It is part of 9 percent of Earth that was once its own continent that flooded with the great ice melt, in essence becoming a continental shelf. The Bahamas are rife with sinkholes, the deepest there being Dean’s Sinkhole at more than 600 feet in depth. El Zacatòn along the Gulf Coast is the deepest water-bound sinkhole at 1,112 feet.

–About 160 feet into the Blue Hole, a cave extends from its westward limestone wall and slopes upward more than 140 feet before extending horizontally more than 160 feet west. It is filled with the skeletal remains of animals that became trapped inside over the many, many years.

–The unusually deep blue nature of the Blue Hole comes from the amount of red light from above that it absorbs. The longer that light passes through water, the deeper blue the water appears.

When a diver lips the regulator, flails his or her flippers and begins to descend into the Great Blue Hole, the time machine of geology in the Caribbean essentially revs its engines and turns its wheels. It is worth the ride.