An unlikely ‘rock’ star of Belize, and darn good eatin’

Do hold your breath. Especially if you are diving for lobster or waiting for the only Belizean celebration centered on a crustacean, or any animal for that matter.

Belize hosts an impressive list of iconic animals that share the spotlight as signature species of the country, but none so endearing that it is the catalyst for a celebration that takes place during different parts of June, the opening month for lobster season. 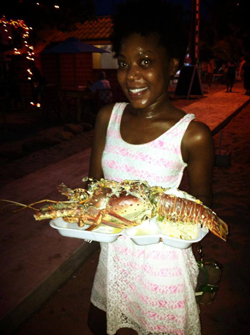 Señor Iguana, Mr. Tapir, Mssr. Manatee, Ms. Scarlet Macaw, eat your collective hearts out. The spiny, reclusive Caribbean curmudgeon of dark nooks and crannies along the reef and coral beds is rock star supreme among all of you. After all, can any of you claim a country-wide festival that features your name in its title?

As popular as the lobster is in Belize come Lobsterfest—usually the last weekend of June in Placencia and Caye Caulker, while Ambergris Caye dedicates an entire mid-June week to the crusty but delectable celebrity—it is an important and threatened species in the Caribbean ecosystem.

Overfishing, pollution and poaching of immature lobsters, often sold to naive visitors or expats living along the azure coastline of Belize, have landed this bottom dweller near the top rung of Atlantic sea creatures on the threatened species list. Belize maintains strict laws concerning Mr. Lobster, who can’t be sold in the market outside of lobster season (June 15 to February 14), can’t be taken if his tail is less than four ounces, and is Arthropoda non grata (not to be taken) from February 15 through June 14, lobster mating and spawning season. Females with eggs or “berries,” very evident dressed in loud orange below the tail, are to be put back into their rocky abodes.

Fishing for lobsters in Belize is usually done with what is known as a “hook stick,” basically just as it sounds, a stick with a hook on the end. Some use wooden boxes that are made of native mangrove wood and often referred to as “shades,” placed among known lobster lairs. These boxes, however, become problematic when the bottom is too rocky. Often a veteran lobster diver will pass along his knowledge of lairs to his or her offspring so that they can reap the rewards of lobster fishing just as their parents and grandparents have done.

Following are some fascinating facts about the Caribbean lobster.

–There are actually three species of lobster commonly found off the shores of Belize: the spiny, the spotted spiny and the slipper lobster, all members of what is actually an insect family known scientifically as Arthropoda. In fact, they are nicknamed “bugs.”

–Red Lobster restaurants should stand corrected: The lobster is not really red; it only appears red underwater. It is actually a purple, rusty shade with tan and black markings. It only turns red when boiled. Two opaque spots just above the tailfin denote the Caribbean lobster.

–Lobster can be caught in anywhere from 1 to 60 feet of water, and some divers are quite adept at holding their breath long enough to make a good living in 60 feet of water. It’s in the family genes!

–Caribbean lobsters take 3-5 years to mature (thus the importance of leaving the small, younger lobsters in the sea) and can grow to two feet in length. The lobster has been known to live as long as 50 years or more and never really stops growing.

–The Caribbean lobsters do not brandish claws, common to lobsters farther north, but their spiny carapace can scar and hurt a human hand or predator with little effort.

–Lobster divers usually find the recluse by detecting its long thread-like antennae that can’t keep from taking a peek outside of the cavern entry.

–Every year in Placencia there is a contest for the best Lobsterfest t-shirt illustration, sponsored by the tourism association. Check it, if you have any artistic proclivities.