A beauty about Belize not found in your guidebook

The natural beauty of Belize is jaw dropping, captivating and almost hypnotic.  Combined with the relaxed pace and room to breathe, ponder, ogle or aestivate, it is what draws more than 200,000 visitors here each year.  There is a beauty, however, that evades the eye of the visitor and even some residents. It is the beauty of the people’s heart.

The generosity and spirit to help one another in need underlies the canopy of the lush tropical rainforest and bridges the endless cayes strewn like diamonds upon the sea. It can be so touching it brings tears, as it did one week in November when a cast from abroad and from Belize teamed up to bring food and goods to 63 Belizean families in need.

On a day dawning gray, cloudy and rainy, three vans and a pickup truck filled with food, live turkeys, chickens and kind-hearted volunteers, some from Wenatchee, Washington in the United States and some from the office of Mayfair Trust in Belize, set out to distribute the goods to the most impoverished families in Belize’s villages and cities. 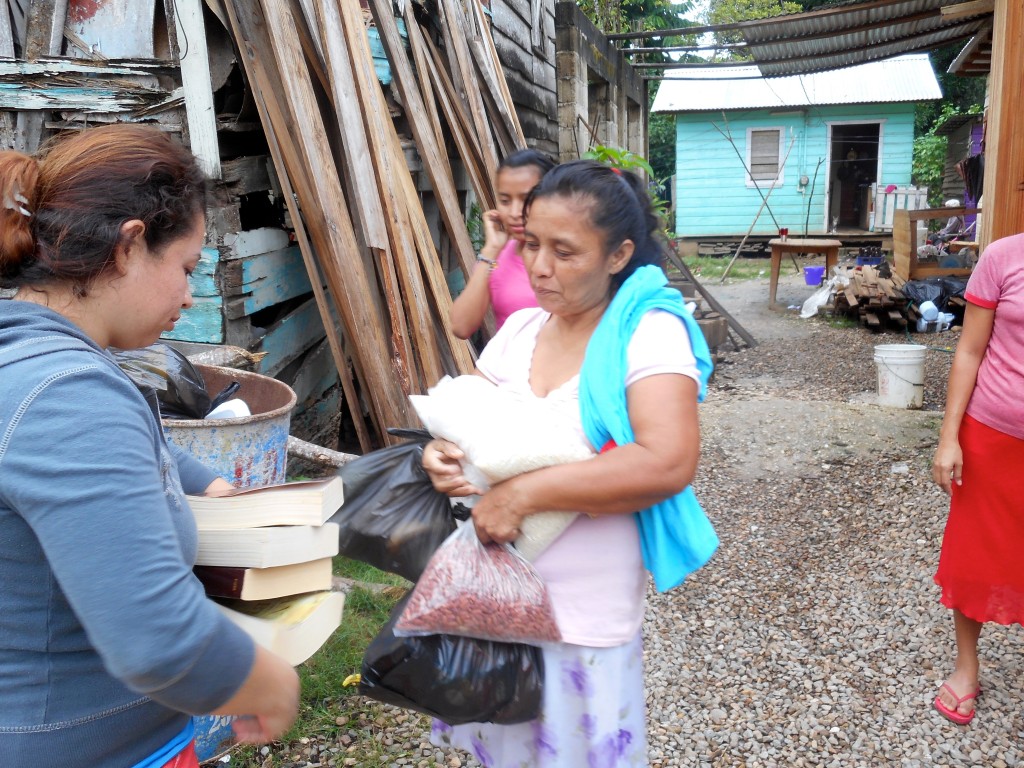 Basic foods such as flour, beans, rice, sugar, oil, soups, pasta, coconut milk and hot chocolate packets, banana bread, Christmas cookies, candy canes, oranges and bananas, accompanied the live chickens and turkeys in the caravan sponsored by Micha Missions, a self-supporting, registered, Belize non-profit group whose outreach is synchronized to the flux of its donations. As one Micha Mission volunteer puts it, “We do what we can when we can.”

Micha works at the grass-roots level, identifying the families most in need from the ground level. In this case the volunteers examined the neighborhoods, homes and family situations to compile the list of which households would receive the donated goods and livestock. On this occasion some of the families were located along muddy trails and roads that had to be walked, with pepper spray and machetes in hand for the potential of attack dogs and dangerous snakes, respectively.

A volunteer recounted some very heart-tugging moments of this most recent outreach.  At one home, a young woman was hesitant to come out and meet the group. She seemed timid and unsure, said the volunteer. But, once she had stepped outside the house to receive the chicken and food, a smile and grateful expression filled her face. She broke out in tears as she started to pray in Spanish for the group and its generosity.

Another house was quiet and seemed uninhabited at first. But when the group beckoned its inhabitants, loud music and vulgar lyrics started to spew from its windows and doors.  It was obvious to the group that the residents were trying to drive the volunteers away. But, ultimately a young, pregnant woman emerged from behind the door of what was no more than a chicken shack of a home. Her eyes lit up when a volunteer explained in Spanish what the group was trying to do and when it gave her the food.

Sometimes the family would invite the volunteers inside, despite mud-caked treads in their boots. Many thanks, prayers and tears were shared, as were conversations in general. A volunteer said that at times it seemed that just the fact someone was there to talk to them and learn about their plights proved more gratifying than receiving the much-needed food.

The frosting on the cake of this excursion is that the pepper spray and machetes can be saved to assail another day as nary a reptile or canine dared to cross the path of this Micha mission.