You are here:
September 19, 2014Inside BelizeBy Alvin

When one is in Belize one is essentially in a place spiritually landmarked and defined by one of its earliest people, the Mayans, who are believed to have originated around 11,000 BC as hunters-gatherers that migrated from Mexico’s Yucatan around 2600 BC to eventually form civilizations southward, mainly into what is now Guatemala, Belize and Honduras. 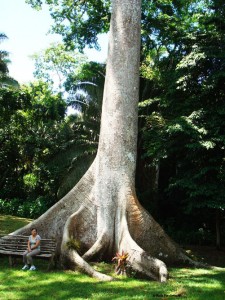 A giant Ceiba at the Caracol ruins

Many visitors come to Belize not primarily for diving, snorkelling or exploring the splendor of its fetching and intoxicatingly blue Caribbean Sea. They come to explore the residuals of the ancient Maya—their ruins, their spiritual base and in many cases, their current assemblages.

Though not the first inhabitants of Belize (the 17,000-year history of human occupation in Belize started with what is known as the Paleo-Indian people), in a figurative sense the Maya form the sinew or core of Belize’s anatomy. The lands, trade routes, industry, community and beliefs of Mayans from roughly 3,200 years ago are evident in modern-day Belize.

The Mayan countenance is one that, despite its outsider-induced diaspora, remains central to the social geography of Belize. Many Belize Mayans still live in the hills once occupied by their ancestors and in thatched shelters with floors of dirt. Hammocks or cots serve as beds inside the one-room abodes. Many still maintain milpas, small clearings in the rainforest where food crops are grown. They also represent a major contributor to the arts and work force of the country.

Though the Mayans’ history has long been a fascination for the rest of the world, it has certainly spiked in the past couple years by the Mayan end-of-days projection as interpreted by many anthropologists and archaeologists, if not sorted theologians. The Western media was especially preoccupied with this interpretation of the Mayan calendar leading up to 2012, the year understood by many to be that which the Mayans marked for termination of the world as we know it.

As experienced by the coming and going of 2012, ambiguities and context are always a challenge to accurately putting an ancient culture’s ideas, projections and findings into plain speak.

One thing that is certain about the Mayan mystique is how the Ceiba tree, commonly found in Belize, symbolizes the heart of the ancient culture’s spiritual body and its fate. It is called the World Tree of the Maya and is flush with meanings, among them the layers of existence. For the ancient Maya, the Ceiba stood at the center of Earth and consisted of nine levels descending to the underworld, which was not necessarily hell, but a damp, cold, dark place that is eventually transformed to light. One might look at it as hell under reformation, not without hope.

Along the path from darkness is middle Earth, the one all of us now walk. The Ceiba then stretches 13 levels above middle Earth to the heavens, from where protection, enlightenment, eternal life and universal consciousness emanate. Ancient Maya believed that the portal to this world lied at the junction of the sky and the sea, which once existed alone and from where mankind originally sprung.

Among the mythical layers of creation represented by the Ceiba are the original mud people, succeeded by the wooden people who were violently flushed out by animals to become monkey people and eventually human beings. In abbreviated terms, the Mayan mythology of creation roughly parallels other concepts of creation, particularly those purporting original sin.

Today, the Ceiba tree is still revered for its spiritual essence and is often spared when forests are cleared for development. The most fitting place for a visitor to see the sacred tree is, of course, at one of Belize’s many ruins. However, they are commonly found throughout Belize’s tropical rainforest.