History and nature: a river runs through them

Belize’s natural wonders make it easy to suggest what first-time visitors should put on their must-see lists. It is only a little more difficult to suggest a tour or trip that can take care of two or three must-do’s at one time.

So, we have the New River, an 82-mile ribbon of water, swollen with natural spectacles, that carries millennia of cultural and commercial history from its origin south of Orange Walk to its mouth in Corozal Bay, opposite the Corozal Town. 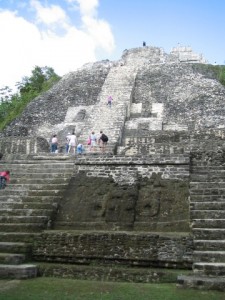 Many Belize tourists are drawn to the country by stories of the primate that growls like a lion (the howler monkey), flora that can harm and heal all at once, bird life that rivals any in the world, and Mayan ruins that date back to 2000 BC. One of the most accessible convergence zones for all of the above exists in a pre-classic Mayan ruin named for a “submerged crocodile.” It is Lamanai, the longest occupied Mayan ruin known, thriving until the arrival of the Spaniards in the 16th century.

From the town of Orange Walk, a visitor can find a tour guide that will motor guests the 25 miles to the ruins with an emphasis on the journey as much or more than the destination. From boat, a passenger is likely to see Morelet’s crocodiles lolling on the swampy banks, perhaps spider and howler monkeys if not seen at Lamanai, possibly toucans and a gender bender of a bird called the northern jacana (aka ‘Jesus bird’ for looking as though it walks on water ). The male jacana is the one that builds the nest and stays home to guard the eggs while the mother carouses among her stable of males en route to more progeny. 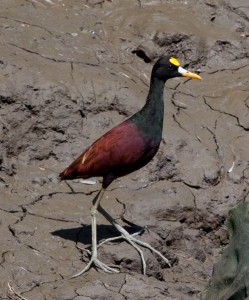 The boat rider will also see remnants of the once thriving sugar industry, initiated in the mid-19th century by refugees from the Caste War in the Yucatan. Some sugar barges still navigate the New River, once the only means of shipping unrefined sugar from Belize to larger European vessels that exported the product across the sea. Long before, the river was a major trading route for Mayans and later became a conduit for sending logwood from the lush inland forests to Corozal Bay where British vessels carried the coveted hard wood to European markets.

Once moored at the trailhead to Lamanai, keep a lookout for a small palm with thorns that resemble short porcupine quills. It is the ‘give and take tree,’ named for the antidote produced from its own sap that cures a rash and infection inflicted by its thorns. Another word of warning: Don’t stand too long beneath a tree on the very short trail to Lamanai. The monkeys are not abashed nor unintentional about relieving themselves from overhead with nary a sound.

Once at the Mayan ruin, the visitor encounters a large, stone-carved mask (known also as structure N9-56 by archaeologists) adorning the right side of the Mask Temple as one stands in front of it. The Jaguar Temple, where torches blazed through the portals of a boxy rendering of the jaguar’s face during ancient rituals, was built in the 6th century.

The High Temple, ‘El Castillo,’ is the largest pre-classic Mayan structure in Belize. Built in 100 AD, it rises 108 feet (33 meters) to a panoramic view of the New River and a jungle canopy stretching into Guatemala and Mexico. Tote a bottle of water in hand when climbing the stairs to the top in the jungle heat.

The ball court, where the game of ‘pok-a-tok’ was played by the Mayans, is home to one of the largest court markers among Mayan ruins. For those visitors tempted to play, be warned: It is believed the winner was beheaded as a sacrifice to the gods.

All three temples at the site have been renovated over the years to mitigate the decay that has riddled Lamanai, which at the height of its existence reached 35,000 in population.

A trip to Lamanai can certainly fill a sizeable portion of the visitor’s must-do list in terms of history, both natural and cultural. Give a shout to the crocs, and the Mayan gods.